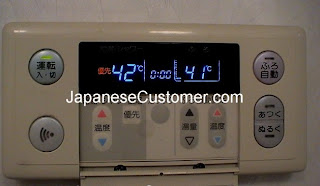 Picture: Electronic controls for a bath in Japan
See Japan in 2012 with Lonely Planet
1. Japanese consumers and green issues when shopping – new survey
“Customers from Brazil, China and India, all of which were urban and relatively affluent, expressed the most interest in environmental and ethical matters, while Japanese consumers were the least engaged.”
Source: Warc
The survey by Euromonitor International showed that
Trust in labels
* “Japanese consumers were the least trusting regarding claims that a product is “free range” or “fair trade”, just 15% and 13%, respectively, had confidence in these labels.”
The definition of “natural” and “organic”
* Japanese shoppers were least satisfied that “organic” products were strictly regulated (37%). In contrast, as many as 63% of French respondents agreed that this was the case.
Source: Euromonitor International
2. Japan fish exports to USA up on 2010
“According to Japan's Ministry of Finance, seafood exports to the US last year exceeded USD 295 million -- a 10.2 per cent increase from 2010.”
Source: FIS Australia
3. The strong yen is allowing more Japanese consumers to holiday in Hawaii
“the strong yen, which makes Hawaii vacations more affordable for Japanese customers”
Source: Seeking Alpha
4. Japan ranks third in global University rankings
“Japanese universities in the top 100, Kyoto University ranked 20th, down from 18th in 2011, while Osaka University, Tohoku University and Tokyo Institute of Technology came between 50th and 60th.”
Source: Japan Times
5. The Nikkei stock Indes reached 10,000 points on Wednesday 14th March
“The Nikkei 225 index at the Tokyo Stock Exchange rose 151.44 points to end at 10,050.52, the highest finish since July 26, when it ended at 10,097.72."
Source: Japan Today