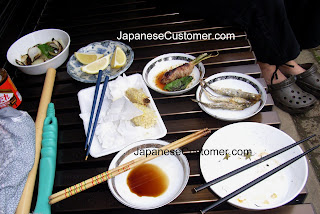 Keep up to date with a Kindle

1. Japanese customers make up the world’s second largest life insurance market
“According to a survey by the Japanese Institute of Life Insurance (JILI) published in September 2006, 87.5 percent of all Japanese households had life insurance policies (including individual annuities). Of these households, average annual premiums amounted to 526 thousand yen, making Japan not only the second largest life insurance market in terms of premiums in the world after the United States but also with one of the highest premiums paid per capita.”
Source: Korea Times by Michael Korver
2. Japanese consumers to see new rules on sales of Fugu in Tokyo
“Fugu is a seasonal and much sought-after delicacy that often commands high prices among diners, who report the mild toxicity of the meat can cause a tingling of the lips.”
Source: Japan Today
See Fugu fish swimming here in the video
3. Japanese scientists find link between Vitamanin E and osteoporosis
“vitamin E stimulates the generation of bone-degrading cells, which normally work with bone-forming cells to maintain bone strength.”
Source: Japan Today
4. Japanese cram school Kumon expanding in Asia
“Kumon Educational Japan Co. is operating in 13 Asian countries and territories, including Vietnam.Though Kumon's fees are higher than local cram schools, its methodical teaching methods have proved to be popular. Kumon had registered more than 100,000 students, respectively, in Indonesia and Thailand as of the end of 2011.”
Source: Daily Yomiuri , Tuesday 6th March, 2012 http://www.yomiuri.co.jp/dy/business/T120304003964.htm
5. Japanese customers flying JAL can now eat Yoshinoya beef gyudon as an inflight meal
“Japan Airlines has started offering gyudon beef bowls for in-flight meals, a dish jointly developed with Yoshinoya Holdings Co., a major beef bowl restaurant chain.”
Source: Daily Yomiuri , Sat 3rd March, 2012 http://www.yomiuri.co.jp/dy/business/T120302004447.htm