Japanese Customers news round up for Thursday February 2nd, 2012 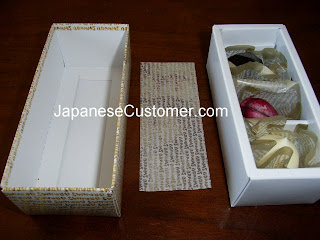 Picture: Chocolates
given for Valentines day in Japan

1. Japanese customers saw their wages drop in 2011 according to labor ministry of Japan
“The average monthly wage for workers in Japan fell 0.2 percent in 2011 from a year earlier to 316,642 yen, down for the first time in two years mainly due to declining pay for part-time workers, the labor ministry said Wednesday.”
Source: Wages Fall In '11 For 1st Time In 2 Yrs, Wednesday, February 1, 2012, Nikkei , http://e.nikkei.com/e/fr/tnks/Nni20120201D01JF058.htm
2. Global awareness survey of Japanese high school students
“Japanese youngsters possess biases with regards to Western and non-Western cultures”
Source: International Journal of Learner Diversity
3. Japanese customers add cute to the everyday with pet inspired bottle covers
“spray bottles of household cleaner in fluffy animal suits”
Source: Only in Japan
4. Kbank in Thailand increased its share of Japanese customers in 2011
“its market share of Japanese customers alone increased to 13% from 12% in 2010.”
Source: Bangkok Post

5.  The chocolate market in Japan center’s around Valentine’s Day, Feb 14
“According to the Chocolate & Cocoa Association of Japan, of the 406 billion in annual sales of chocolate in 2010, approximately 53% came during the month leading up to Feb 14. “